No results found with that criteria :(
ADVANCED SEARCH
You are here: HomeCatalogueAudioLine ArraysL-Acoustics A10 WIDE/Focus Ex-demo, Like new
ABOUT THE PRODUCT ABOUT THE MANUFACTURER GLOSSARY

A10 Focus is a medium throw loudspeaker designed for production applications. Part of the multifunctional A10 family, the passive 10“ enclosure offers exceptional deployment flexibility and simplicity without compromising performance.
With a tightly-controlled 10° enclosure coverage, A10 Focus boasts an impressive output of 140 dB and ensures projection up to 35 m.
Panflex allows users to adapt directivity to the audience geometry and ensure exceptional frequency response stability. Combinations of A10 Focus and A10 Wide can be flown or stacked to form a vertical line source. A10 Focus can also be used individually as a configurable directivity point source for front fill or delay applications where narrow coverage is required.
An A10 Focus line source provides exceptional performance in the vocal range. The companion subwoofer KS21 further reinforces contour and extends bandwidth to 31 Hz for demanding applications. A10 Focus is a highly scalable solution that delivers concert-level performance for small to large events, or supplements a larger L-Acoustics solution as fills or delays.

A10 Wide is a medium throw loudspeaker designed for production applications. Part of the multifunctionnal A10 family, the passive 10“ enclosure offers exceptional deployment flexibility and simplicity without compromising performance.
The 30° enclosure of A10 Wide enables a compact array, deployed radially, to provide expansive coverage while preserving sightlines. Panflex allows users to adapt directivity to the audience geometry and ensure exceptional frequency response stability.
Combinations of A10 Wide and A10 Focus can be flown or stacked to form a vertical line source. A10 Wide can also be used individually as a configurable directivity point source for delays and pole-mounted applications.
An A10 Wide line source provides exceptional performance in the vocal range. The companion subwoofer KS21 further reinforces contour and extends bandwidth to 31 Hz for demanding applications.
A10 Wide is a highly scalable solution that delivers concert level performance for small to large events or supplements a larger L-Acoustics solution as fills or delays. 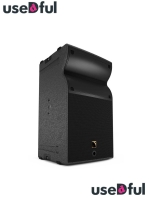