No results found with that criteria :(
ADVANCED SEARCH
You are here: HomeCatalogueAudioSubwoofersL-Acoustics SB15P Used, Second hand
ABOUT THE PRODUCT ABOUT THE MANUFACTURER GLOSSARY

L-Acoustics subwoofers complement systems in applications where extended bandwidth is required. All subs incorporate high excursion drivers, ultra-low vibration walls and laminar airflow L-Vents with a flared profile, resulting in dramatic reduction of port noise, maximized dynamics and power handling and an exceptional level of performance.
L-Acoustics subwoofers can be deployed in diverse modes, making them versatile enough to address any rental or fixed installation application. Engineers and sound designers can choose from standard or cardioid configurations, creating a variety of symmetric and asymmetric directivity patterns adapted to each specific design. 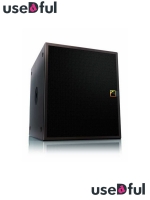