No results found with that criteria :(
ADVANCED SEARCH
You are here: HomeCatalogueAudioDigital Audio MixersAllen & Heath Avantis Ex-demo
ABOUT THE PRODUCT ABOUT THE MANUFACTURER GLOSSARY

The third mixer based on our 96kHz XCVI FPGA engine, Avantis puts all our next-generation technology in a 64 channel / 42 configurable bus console, with dual Full HD touchscreens.
A super-flexible workflow with Continuity UI, extensive I/O options, add-on processing from our flagship dLive mixing system, and a rugged full metal chassis. 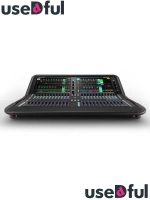