No results found with that criteria :(
ADVANCED SEARCH
You are here: HomeCatalogueAudioSubwoofersd&b Audiotechnik B6-Sub/NL4 Used, Second hand
ABOUT THE PRODUCT ABOUT THE MANUFACTURER GLOSSARY

The B6-SUB is a high performance subwoofer designed for ground stacked applications, housing a long excursion 18” driver built into a bass-reflex design.
When three or any multiple of three B6-SUBs are used, they can be positioned in a Cardioid Subwoofer Array with one cabinet physically facing backwards and driven by an amplifier channel with CSA mode selected.
his achieves exceptional directivity control in lower frequencies and significantly reduces the energy radiating towards to the rear. The cabinet is constructed from marine plywood and has an impact and weather protected PCP (Polyurea Cabinet Protection) finish.
The front of the loudspeaker cabinet is protected by a rigid metal grill backed by an acoustically transparent foam, whilst the side panels incorporate two handles. Four wheels are mounted to the rear and the enclosure features two runners to protect the bottom panel from scratching. Two correspondingly shaped recesses are incorporated into the top panel of each cabinet to accept these runners, preventing cabinet movement when stacked. An M20 threaded flange in the top panel accepts the d&b Loudspeaker stand winder M20. An optional transport lid protects the front of the subwoofer during transit. 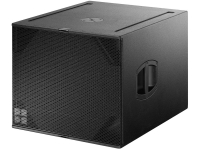