No results found with that criteria :(
ADVANCED SEARCH
You are here: HomeCatalogueAudioSubwoofersd&b audiotechnik SL-SUB/NLT4 Used, Second hand
ABOUT THE PRODUCT ABOUT THE MANUFACTURER GLOSSARY


The SL-SUB and SL-GSUB are cardioid subwoofers to compliment the GSL and KSL Systems. The SL-SUB rigging hardware allows columns of up to 14 cabinets to be flown while the SL-GSUB is intended for ground stacked applications only. Both subwoofers are actively driven 2-way bass-reflex designs housing three long excursion 21" neodymium drivers. Two drivers face to the front while one radiates to the rear.
The front and rear facing drivers operate in independent bass reflex chambers and are driven from separate amplifier channels. The cardioid dispersion pattern reduces unwanted energy behind the system, resulting in less excitation of the reverberant field to deliver highly accurate low frequency reproduction. The frequency response extends from 33 - 84 Hz / 30 - 65 Hz. The SL-SUB cabinet incorporates front and rear rigging strands while the SL-GSUB has no rigging components and is intended for ground stack purposes.
The cabinets are constructed from marine plywood with an impact and weather protected PCP (Polyurea Cabinet Protection) finish. The front and rear of the subwoofers are protected by rigid metal grills backed by an acoustically transparent and water repellent fabric. Two runners extend from the front to rear to protect the bottom panel. Two correspondingly shaped recesses are incorporated in the top panel accepting the runners and preventing cabinet movement when subwoofers are stacked. The side panels incorporate four recessed handles and four heavy duty wheels are mounted on the rear of the subwoofers. 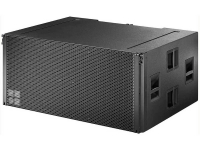