No results found with that criteria :(
ADVANCED SEARCH
You are here: HomeCatalogueAudioSubwoofersd&b audiotechnik_T-SUB/NL4 Used, Second hand
ABOUT THE PRODUCT ABOUT THE MANUFACTURER GLOSSARY

The T-SUB is an actively driven bass-reflex loudspeaker fitted with a high excursion 15" driver. d&b SenseDrive technology is available when powered by the D12 amplifier. It can be used to supplement the LF headroom of the T10 loudspeaker in various combinations, ground stacked or flown, either integrated on top of a T10 array or as a separate column. The loudspeakers are mechanically connected using rigging links on both sides of the cabinet front, which slide out when needed, and with a central splay link at the rear of the cabinet.
The T-SUB cabinet is constructed from marine plywood with an impact resistant paint finish and a handle in the top panel. The front of the loudspeaker cabinet is protected by a rigid metal grill in front of an acoustically transparent foam and two EP5 or NL4 connectors wired in parallel are mounted on the rear panel. 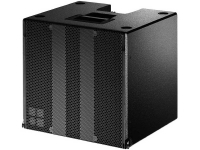