No results found with that criteria :(
ADVANCED SEARCH
You are here: HomeCatalogueAudioLine Arraysd&b audiotecknik V12/NL4 Used, Second hand
ABOUT THE PRODUCT ABOUT THE MANUFACTURER GLOSSARY

The V12 is a 3-way passive design housing 2 x 10" LF drivers, one hornloaded 8" MF driver and two 1.4" exit HF compression drivers with 2.5" voicecoils mounted to a dedicated waveshaping device. The symmetrical dipolar arrangement of the neodymium LF drivers around the centrally mounted coaxial MF and HF components allows a smooth overlap of the adjacent frequency bands in the crossover design. This results in an exceptional 120° horizontal constant directivity dispersion control nominally being maintained down to 250 Hz. The mechanical and acoustical design enables flown vertical arrays of up to twenty four loudspeakers. It can be used in columns of purely V12 loudspeakers or combined with V8s and / or with V-SUBs. The cabinet is constructed from marine plywood and has an impact and weather protected PCP (Polyurea Cabinet Protection) finish. The front of the loudspeaker cabinet is protected by a rigid metal grill backed by an acoustically transparent foam. Each side panel incorporates a handle, while two additional recessed grips are provided at the rear bottom of the cabinet.


d&b audiotechnik is a German loudspeaker and amplifier manufacturer, founded in 1981, located in Backnang, north of Stuttgart. Although d&b is an international company with subsidiaries in Europe, America and Asia their products are engineered and produced only in Germany.
d&b loudspeakers are used in rental and installation markets for events, multimedia, musicals, concert halls, theatres, opera houses, broadcast and everything from the small conference rooms to the large-scale stadiums.
Their claimed unique sales proposition is that they augment the volume, or hearability, of a speaker or musician, but not the quality of the sound. They supposedly achieve this flat response through digital signal processing (DSP) so that profile changes introduced by loud speakers and other audio components are compensated for and thus eliminated. 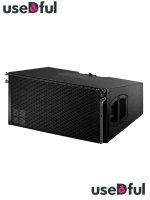