No results found with that criteria :(
ADVANCED SEARCH
You are here: HomeCatalogueAudioLine ArraysFunktion One Research Resolution 5T-4D Downfill Package Used, Second hand
ABOUT THE PRODUCT ABOUT THE MANUFACTURER GLOSSARY

The Resolution 5 Touring enclosure is a high intensity three-way, mid-high loudspeaker used to create accurate point-source arrays. The unique and patented midrange Axhead loading device not only gives incredible efficiency and dispersion control, but also increases high frequency output from the 8" cone driver. This means that the crossover point to the compression driver can be raised to around 6kHz for dramatically reduced distortion compared to the compression driver based midrange so prevalent in the industry. Its highly controlled and focused dispersion enables precise tailoring of overall system coverage, simply through the geometry of the array. Unwanted room reflections are thereby substantially reduced, maintaining the enclosure`s high intelligibility. The system`s flexibility in application makes it suitable for any event size from 500 people to the largest festival, thereby maximising use of rental inventory. Its innovative and simple integrated flying system, combined with minimal size and weight, allow for easy and effective flying or ground stacking. The Resolution 5 is economic in terms of system cost, production budget and truck space. Above all, the accuracy and sonic quality it delivers are exceptional for all genres of music.

The Resolution 4D Downfill enclosure is designed to complete Resolution 5 flown arrays. It offers extensive
vertical dispersion providing coverage right down to the first row of seats. Its unique tapered shape allows
the rest of the cluster to be coupled closely together generating a coherent wave-front and adding a
finishing touch to the spherical cluster's aesthetics. As with other Resolution Touring enclosures, all
inter-cabinet flying hardware is included.


Funktion-One is a British loudspeaker manufacturer based in Dorking, Surrey, England. The company was formed in 1992 by Tony Andrews and John Newsham. It is known as an "industry standard" designer and manufacturer of high quality loudspeaker systems for venues like dance clubs or festivals.
Funktion-One Systems are notably in use at Berghain (Berlin), Sisyphos (Berlin), Space (Ibiza), Jaeger (Oslo), Cocoricò (Riccione), Cielo (New York), Hot Mass (Pittsburgh), The Block (Salt Lake City), École Privée (Montreal), Smartbar (Chicago), Studio 50/80 (Trier), Colosseum (Jakarta) and De School (Amsterdam), some of the most renowned clubs worldwide.
The company was formed in 1992 by Tony Andrews and John Newsham, following their departure from Turbosound - a company focused on sound systems for music festivals they had started in 1978.
Following eight years of research and development, Funktion-One completed its first major project - designing and installing a sound system for the Millennium Dome's Central Show. Since then the company has built a reputation in audio around the world.
According to Andrews, the company's name spells "funktion" with a "k" as a reference to 1970s funk music.
Funktion-One equipment, installed by Sound Investment Audio, is in use at many music venues in the United States. 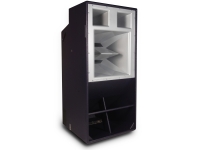