No results found with that criteria :(
ADVANCED SEARCH
You are here: HomeCatalogueAudioLine ArraysL-Acoustics KIVA II Package Used, Second hand
ABOUT THE PRODUCT ABOUT THE MANUFACTURER GLOSSARY

The Kiva II is an ultra-compact WST modular line source designed for long-throw sound reinforcement applications with minimum visual impact. The Kiva II features two 6.5? speakers in a bass-reflex cabinet and a 1.75? diaphragm compression driver loaded by a DOSC waveguide and L-Fins. Kiva II features an outstanding SPL/format ratio thanks to the excursion and power capability of the transducers. The amplifier density is maximized with 16 ohm impedance.
The Kiva II operates from 70 Hz to 20 kHz. The coplanar transducer arrangement and the new K front grill produce a 100° symmetric horizontal directivity output with a smooth tonal response free of secondary lobes over the entire frequency range. In accordance with the WST coupling criteria to preserve the wave front coherency, the maximum inter-element angle is 15°.
The internal passive crossover network uses custom filters. The L-Acoustics amplified controllers ensure the linearization and the protection of the transducers (L-Drive).
The cabinet is made of a new composite material, with a high immunity to moisture and shocks and remarkable acoustic properties. Kiva II weighs a mere 14 kg (31 lbs.) and its compact elegance makes for an easy integration in any situation. Available in white or custom RAL CLASSIC, it melts into any architecture. The enclosure is rated IP 55. The flush-fitted rigging features a visual safety check. 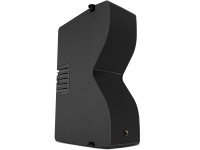