No results found with that criteria :(
ADVANCED SEARCH
You are here: HomeCatalogueAudioSubwoofersL-Acoustics SB218 Used, Second hand
ABOUT THE PRODUCT ABOUT THE MANUFACTURER GLOSSARY

The L-ACOUSTICS SB218 is the companion subwoofer for V-DOSC or ARCS and features two, front-loaded 18-inch transducers loaded in an optimally-sized and tuned vented enclosure. With power handling capacity of 1100 Wrms (4400 Wpeak) and response to 25 Hz, the SB218 is ideal for applications requiring maximum low frequency extension and impact.
The SB218 provides unparalleled low end punch and bass articulation combined with high power handling and efficiency. Due to its compact design and critically damped tuning, multiple SB218 enclosures couple effectively while providing the bass definition and musicality that only a front loaded subwoofer can provide.
Due to its 200 Hz bandwidth capability and complementary phase characteristics, optimum coupling and maximum low end efficiency are obtained when the SB218 is used with V-DOSC. The SB218 is unique in that it can be flown in column arrays up to 8 enclosures deep. When flown, low frequency directivity control is provided and optimum low frequency summation is obtained when the SB218 array is closely coupled physically to the V-DOSC array.
Ruggedly constructed of 24 mm baltic birch and internally braced with steel corner plates, the SB218 remains free of vibration at extreme sound pressure levels. The compact front dimensions of the SB218 are convenient for use under stages or along stage fronts in either vertical or horizontal (single or double row) orientations. With advanced electronic arc processing, directivity control is obtained when the SB218 is used in ground-stacked horizontal line array configurations. 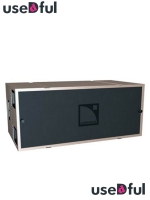