No results found with that criteria :(
ADVANCED SEARCH
You are here: HomeCatalogueAudioConventional LoudspeakersMartin Audio Blackline H3 Package Used, Second hand
ABOUT THE PRODUCT ABOUT THE MANUFACTURER GLOSSARY

The Blackline H3 is a very high performance, all-horn, three-way system in a single, wide-bandwidth package.
The Hybrid low frequency section comprises a horn-loaded 15 (380mm) / 4 (100mm) voice coil driver that is reflex loaded to extend the LF output to below the natural horn cut-off point. The 10? (250mm) mid-horn features a unique ?phase-ball? loading device and is teamed with a 70? x 40? horn-loaded 1? (25mm) exit compression driver for efficient mid-HF performance. The system has a passive 2kHz mid-HF crossover network to permit bi-amp operation using the M3 Electronic Controller.
The H3 is housed in a trapezoidal birch ply cabinet and may be horizontally arrayed for wide coverage applications. Its twelve M10 inserts make a variety of mounting methods possible including horizontal or vertical mounting. Generous handles and rear castors are fitted for easy cabinet deployment.
A Martin Audio M3 Electronic Controller is available to provide H3 crossover and limiter facilities. See the M3 Electronic Controller Technical Specifications for suitable M3 Controller Cards. 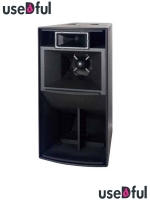