No results found with that criteria :(
ADVANCED SEARCH
You are here: HomeCatalogueAudioSound SystemsMeyer Sound MICA-700-HP Sound Package Used, Second hand
ABOUT THE PRODUCT ABOUT THE MANUFACTURER GLOSSARY

The MICA compact high-powered curvilinear array loudspeaker is the mid-sized member of the acclaimed MILO family of loudspeakers. MICA brings the very high output and smooth, extended high-frequency response that is the MILO family?s sonic signature to a smaller package with broad 100-degree horizontal coverage. This makes MICA ideal for applications that do not require quite as much power and throw distance as MILO or where weight and size are a concern. MICA is suited to a wide variety of applications such as touring, rental, and fixed installation, and its sonic compatibility with MILO makes it an excellent component in a MILO family system.

The Meyer Sound 700-HP ultra high-power subwoofer sets a new standard for the power-to-size equation. The 700-HP`s power and bandwidth handle high continuous operating levels and extreme transient information with minimal distortion in its operating frequency range.
Meyer Sound?s rigorous design approach has been applied to extract the greatest efficiency from every part of the system, resulting in the 700-HP?s effortless reproduction of low frequency transient information. As a self-powered system, the transducers, amplification and control electronics of the 700-HP are created as a symbiotic system that optimizes performance and maximizes its tremendous power.
The operating frequency range of 28 Hz to 150 Hz complements other Meyer Sound loudspeakers and line and curvilinear arrays in sound reinforcement applications requiring maximum headroom at the low end of the frequency spectrum.
The 700-HP`s efficiently tuned cabinet houses two Meyer Sound-designed and -manufactured back-vented, long-excursion, 18-inch cone drivers. Each driver features a 4-inch voice coil and is rated to handle 1200 AES watts. The drivers have also been engineered for extreme efficiency, using high-gauss neodymium magnets for the most powerful magnetic field strength. High magnetic field strength increases the driver?s sensitivity, which yields greater output, while keeping heat dissipation requirements within operational tolerances.
An integral two-channel class AB/H amplifier with complementary MOSFET output stages supplies total peak power of 2250 watts (1125 watts per channel). With twice the amplifier power of the 650-P subwoofer, the 700-HP produces an average of 3 dB more overall SPL, with enormous headroom to accommodate the most extreme demands with ease. Recent tests conducted by Meyer Sound show the 700-HP producing significantly higher output than other "high-power" subwoofers.
The amplifier, control electronics and power supply are integrated into a single, field-replaceable module mounted in the rear of the cabinet. The cabinet is constructed of multiply hardwood and coated with a textured black finish. Integral metal grilles lined with acoustical black mesh protect the cone drivers. Designed mainly for stage or ground placement, the stackable 700-HP includes plastic skids on the bottom of the unit, preventing damage to the enclosure or the unit below. The skids align with slots on the cabinet?s upper surfaces ensuring secure, aligned stacking. For maximum convenience in touring situations, the 700-HP can even travel in stacks on the MCF-700 caster frame.
The 700-HP is truck-smart, with exterior cabinet dimensions suitable for both European and US truck widths. An optional QuickFly rigging kit is available, installed at the factory or as a field upgrade. Up to 10 cabinets can be suspended from the optional MTG-700 top grid in a straight hang at a 7:1 safety factor.
Options available for the 700-HP include weather protection and finishes in custom colors for fixed installations and other situations requiring specific cosmetics.
An optional RMS remote monitoring system module allows comprehensive monitoring of all key system parameters on any RMS-equipped host PC. In addition, Meyer Sound?s MAPP Online multipurpose acoustical prediction program allows quick prediction of coverage, frequency response, impulse response and maximum output of the 700-HP and other Meyer Sound loudspeakers and loudspeaker systems. 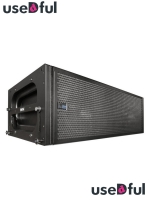