No results found with that criteria :(
ADVANCED SEARCH
You are here: HomeCatalogueAudioDigital Audio MixersMIDAS Audio PRO6-CC-TP-DL371-PRO6-01-DL251 Package Used, Second hand
ABOUT THE PRODUCT ABOUT THE MANUFACTURER GLOSSARY

The MIDAS PRO Series has become established as the industry standard on live concert tours and the road-proven PRO6 featuring 64 simultaneous input channels and 35 time-aligned and phase-coherent mix buses, shares the familiarity of a common user interface and workflow with PRO3 and PRO9. Like all PRO Series consoles, the PRO6 features managed latency and 40 bit floating point processing precision. PRO6 sets the standard of performance in high-profile live sound applications and is a truly impressive digital control surface for the engineer whose very livelihood depends on both unparalleled functionality and reliability.
HyperMAC and AES50 audio networking technologies allow the PRO6 to dynamically assign up to 288 inputs and 294 outputs at 96 kHz sampling rate to any of its input channels and bus outputs on a scene-by-scene basis. This high level of connectivity, coupled with the large channel and bus counts, makes the PRO6 equally at home in theatres and symphony halls as it is in live concert touring, outside broadcast and music festivals. 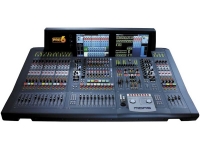