No results found with that criteria :(
ADVANCED SEARCH
You are here: HomeCatalogueLightingLocation Lighting FixturesMinuit Une IVL M-Carre Used, Second hand
ABOUT THE PRODUCT ABOUT THE MANUFACTURER GLOSSARY

IVL Carr?s are multi-directional, immersive, wide-covering area fixtures, to make the show in mid-size venues, free of heavy logistics.
Each IVL Carr? is covering a wide area by producing 4 directive light plans, one by each side of the square. Each plan is adjustable at a 180° angle to create stunning perspectives when combined together. The light plans of each IVL Carr? can be cut into 1, 2, 4, 8, 16, 32 or 64 beams: welcome to a new world of infinite possibilities, from a single light source.
Programmable with any DMX console, the IVL Carr?s are simple and intuitive to control, and will only require a few minutes to get your hands on.
In a time when audiences are more and more asking for experiences, IVL Carr?s perspectives can help create truly immersive designs with their smooth enveloping textures and 3D rendering perception. With different operation modes, IVL Carr?s perfectly fit any mid-size venue, from 1000 to 5000 people, and are an infinite playground for creativity.
With IVL Carr?s, one flightcase already makes the show!

IVL products offer infinite lighting combinations, creating exponential experiences when combined together.
Easy to program, easy to install, without heavy logistics, IVL Lighting is the solution for everyone who wants to get more out of lighting in mid-sized venues.
With IVL, produce smarter spectacular lighting design offering:

A time and cost-effective solution, scalable to your needs.

A simple and hands on solution


Minuit Une was founded in 2013 by a team of optical engineers, passionate about music and great fans of the live concert scene. Going from concert to concert, mostly in mid-size venues and occasionally to bigger shows, they always looked at the scenic lights during concerts with very technical eyes.
And they made an observation: while the biggest set-ups allow the creation of incredible lighting experiences, immersion and perspectives are harder to be produced when there is fewer possibilities to have plenty of mono-directional fixtures, such as spots and beams, with many trusses. In other words: lighting options were limited by the logistics in mid-size venues.
IVL Lighting came to life by the passionate idea of creating a wide-coverage, immersive, multi-directional lighting fixture, specially designed to make the show in mid-size venues, from 1000 to 5000 people.
Our values are passion, satisfaction and reliability. Passion first, because lighting design is not like any other job.
It is about creating emotions and experiences. At Minuit Une, we believe each design is a new thrill. Then satisfaction and reliability, because Minuit Une’s teams are dedicated to offering each user and customer a tailor-made service, so you can focus on your creativity.
Light does make the difference. Let’s create new lighting experiences together! 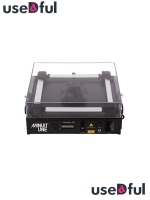