No results found with that criteria :(
ADVANCED SEARCH
You are here: HomeCatalogueVisualVideo Data ProjectorsPanasonic PT-DZ110X Used, Second Hand
ABOUT THE PRODUCT ABOUT THE MANUFACTURER GLOSSARY


The Panasonic DZ110X has been a firm favourite for many an event projection job over it’s time. At 10600 Lumens, it’s great for medium venues and it’s low size and weight make it a real winner when space is tight. A new and unique multi-unit brightness control function also gives these projectors the flexibility to meet a wide range of applications. With native WUXGA resolution and all the benefits of 3-Chip DLP technology it’s a great machine for anything from conference video to film screenings. The price point means that Full HD is now open to a lot more of the market. 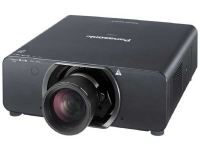