No results found with that criteria :(
ADVANCED SEARCH
You are here: HomeCatalogueVisualVideo Data ProjectorsPanasonic PT-DZ16K2EJ-ET-D75LE20 Package Ex-demo
ABOUT THE PRODUCT ABOUT THE MANUFACTURER GLOSSARY

The PT-DZ16K 3-Chip DLP Projector from Panasonic produces bright, sharp images by employing a four lamp system, which provides 16,000 lumens of brightness for comfortable viewing in various lighting conditions.
Together with 16,000 lumens of brightness, Panasonic`s System Daylight View 2 technology assists the versatile use of the projector by automatically adjusting the picture quality of the image to match the living room or theater room conditions. This is made possible by utilizing built-in ambient light and color sensors that adjust the white balance, gamma curve, and sharpness settings to maintain bright, crisp pictures that match the viewing environment.
The digital image processing circuit brings greater clarity and sharpness to details, by reproducing fine nuances that were lost due to image compression. After a two dimensional analysis of the video signal`s frequency in each scene, the new circuit optimizes the sharpness of each image portion based on the extracted information.
The PT-DZ16K is ideal for a wide range of applications requiring high brightness and long-term operation, such as museums, entertainment facilities, churches, and large auditoriums. 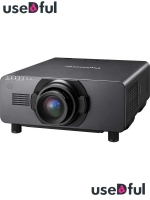