No results found with that criteria :(
ADVANCED SEARCH
You are here: HomeCatalogueAudioSound SystemsRCF HDL 30-A SUB 9006 AS Sound Package Used, Second hand
ABOUT THE PRODUCT ABOUT THE MANUFACTURER GLOSSARY

The RCF HDL 30-A is a compact bi-amped 2-way active touring system for medium to large events, both indoors and outdoors. It features two 10-inch woofers and an impressive 4-inch titanium compression driver. The time coherent waveguide is the result of in-depth research and design. HDL30-A is the first line array in a composite cabinet with zero-degree phase and ultra-linear amplitude response.
The built-in 2200 watt class-D amplifier delivers excellent playback clarity and up to 137 decibels SPL max. The RCF HDL30 -A features state of the art RCF transducers with neodymium magnets. Considering its acoustical power, it has a remarkably low weight for easy handling and flying.

NETWORKED CONTROL AND MUCH MORE RDNet is a robust management network and control platform for small, medium and large arena-sized sound systems, as well as complex and extended installations. Based on a proprietary network protocol, RDNet provides intuitive control and monitoring of every connected device/object in the RCF audio system. Each device has DSP to address specific presets or modifications of parameters to single or groups of objects. A network user can change level, delay, EQ (linear phase FiR as well) and other settings, including advanced subwoofer configurations. RDNet is not only designed for loudspeakers?you can control parameters and routing of multiple RCF devices, such as digital matrixes or amplifiers.

The custom 4 PATH designed waveguide allows a precise coverage of 100 x 15 degrees, while also delivering an excellent, linear high-frequency response. The unique shape of the four ducts forming the guide creates an ideal isophasic load from 680 Hz to the highest audible frequencies.

The high strength enclosure in composite polypropylene has a revolutionary new rigging concept inspired by its big brother: the RCF HDL-50A. Compared to its acoustical power, it has a remarkably low weight for easy handling and flying. The integrated mechanics are both fast and reconfigurable, allowing the system engineer to create J-shaped and spiral arrays starting with 0.2° angles. The hardware is designed for an easy and fast setup. The angle can be adjusted before to hang the system, on the ground, and slip automatically into the correct position when pulling up the array. Up to 20 HDL 30 -A modules can be fastened on a single flybar.

The SUB 9006-AS is one of the most powerful 2x18” subwoofers in the field of live sound. Featuring two high-power hyper-vented 18” neodymium woofers with 4.0” inside-outside voice coils, this cabinet delivers a serious amount of low frequencies. Powered by a 7200 W digital amplifier, the SUB 9006-AS can perform in the most demanding situations. The housing of the SUB 9006-AS matches the RCF D-Line HDL50-A and HDL10-A array systems, enabling to build stacked systems in a perfect combination.


RCF S.p.A. is a widely recognized Italian manufacturer of high performance audio products including power amplifiers, loudspeakers, digital mixers and digital signal processors (DSP).
RCF is an Italian audio products manufacturer founded in 1949. The first products sold were microphones and electroacoustic transducers (loudspeakers).
In the late ’60, concert sound was going electric, and many loudspeaker pioneers were searching for high-powered devices to use in their designs.
RCF was one of the first European OEM suppliers for international brands, thanks to the experience built on high power transducers.
After few years, thanks to the in-depth know-how in loudspeaker technology, RCF begin to develop and produce sound reinforcement systems under the same brand.
The introduction of the ART Series, in 1996, has established RCF among the few global manufacturers of active loudspeakers.
The TT+ High Definition - Touring and Theater series equipped with DSP, introduced in 2004, and the RDNet Networked Management technology, let RCF a full recognition in the professional audio market.
Since 2017, all DSP active speakers incorporate FiRPHASE technology, which allows achieving a 0° linear phase playback.
RCF is the first audio manufacturer to have a complete catalogue of 0° phase-compatible sound systems including line arrays. 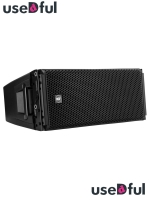