No results found with that criteria :(
ADVANCED SEARCH
You are here: HomeCatalogueAudioLine ArraysSeeburg Acoustic Line G3 dp Package Used, Second hand
ABOUT THE PRODUCT ABOUT THE MANUFACTURER GLOSSARY

The G 3 system is a Curved Cylindrical Wave Radiator featuring the same technology as the GALEO Line Array. A single G 3 element is fitted with six 8? low-mid drivers and three 1.4? HF drivers in a 2-way active configuration, and has a fixed vertical dispersion of 20°.
By simply interchanging the horn located on the front of the cabinet, horizontal dispersion can be increased from 80° to 120°. The G 3 provides a longer throw, a higher sound level before distortion and a more precise directivity than a comparable conventional horn loaded system. The low end cut off at 80 Hz allows the G3 to harmonise very well with high power 18" or 21" sub woofers.
The tilt and pivot bracket included as standard allows simple set up and alignment of the system. Separately available screw on flying hardware allows multiple G 3 units to be combined to form a larger system. Both ground stacked and flown applications are possible.

The G 3 is also available in the self powered dp version.


SEEBURG acoustic line was founded in 1985 by Winfried Seeburg. The company currently employs 20 people. Our focus is the development, production and sales of professional loudspeaker system for mobile applications and permanent installations. Our corporate philosophy is to pursue innovation, maintain product continuity, and cultivate customer focus, all at the the highest of quality standards. 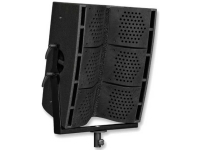