No results found with that criteria :(
ADVANCED SEARCH
You are here: HomeCatalogueAudioDigital Audio MixersSoundcraft Vi2000 Package Used, Second hand
ABOUT THE PRODUCT ABOUT THE MANUFACTURER GLOSSARY

The latest addition to Soundcraft`s Vi range of digital live consoles, the new Vi2000 brings unparalleled mixing power to the live touring, install and corporate AV markets in a single-box, cost-effective package. The new console combines the unique Vistonics-based control surface concepts of the highly successful Vi3000, 5000 and 7000 consoles, with Soundcraft? SpiderCore - a powerful integrated DSP and IO engine based on STUDER technology and compact enough to reside inside the control surface itself.
Running the latest V6.3 console software, the Vi2000 now includes vMIX automatic microphone mixing, alongside the acclaimed BSS DPR901ii Dynamic EQ via an insertable processing pool which also includes Lexicon Multi-effects and the ability to insert any external device.
In addition to a full complement of on-board mic and line IO, configurable up to 48 mic line inputs and 16 line outputs using combinations of 16ch XLR modules in 4 rear-mounted slots, the console includes two 64ch expansion slots allowing up to two MADI-based Stageboxes to be connected, or alternatively the slots provide access to the extensive range of D21m IO option cards, addressing all industry standard audio formats. The total I/O count of the console is 246 in 246 out.
In common with other Vi000-series consoles, a built-in 64x64ch Dante interface provides direct recording/playback connection via Ethernet to any PC or Mac-based recording software, or allows the Vi2000 to integrate into an existing Dante network.
The Dante interface is complimented by an additional optical MADI interface designed for either record feeds or connection of the Soundcraft Realtime Rack Plug-in engine, adding the power of Universal Audio UAD-powered plug-ins to the Vi2000`s pristine audio quality.
The package is completed by an ultra-compact frame design only 1.15m in width, with 16 input faders and 8 output faders, allowing the console to fit into both space and budget restricted applications. Patented features like Faderglow, VM2 microphone monitoring and Vistonics provide a uniquely user-friendly mixing experience and superb sound quality is assured by a 40-bit floating-point DSP environment, running STUDER, BSS, Lexicon and dbx algorithms. 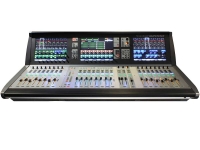