No results found with that criteria :(
ADVANCED SEARCH
You are here: HomeCatalogueAudioSubwoofersdB Technologies DVA S1518N Used, Second hand
ABOUT THE PRODUCT ABOUT THE MANUFACTURER GLOSSARY

The DVA S1518N is a bandpass subwoofer based on the DVA S10, but with 50 percent higher power amp output, an integrated DSP, and an RDNet link. A remarkably versatile subwoofer, it delivers tight and punchy bass response that supports and transitions smoothly to satellites? lower midrange frequencies.
The DVA S1518N is equipped with a next-generation, 18" woofer driven by a built-in 1500W digipro G2 digital power amp. Subwoofer arrays are easily flown using the optional SRK10 rigging hardware retrofit.
The S1518N will also serve you well in compact stacks paired with DVA T12, T8 and T4 units or DVX Series enclosures. Equipped with PFC switched-mode power supplies, they are largely impervious to line voltage fluctuations, which is a tremendous asset in a touring rig. Our network-enabled DVA subwoofers are designated by an ?N? in the product name. They feature a premium-quality DSP boasting excellent audio specs with variable crossover frequencies, precise limiter functions and adjustable delay settings for perfect time alignment.


dBTechnologies (1990) is a brand owned by AEB Industriale s.r.l., an italian Company founded in 1974 in Bologna (Italy), which is part of the Pro Audio industry leader RCF Group, providing a strong know-how in the Professional Audio market.
Its recent story begins in 2004 when Arturo Vicari, CEO of AEB Industriale s.r.l., acquired RCF and founded RCF Group, an international holding leader in design, production and marketing of products, systems and solutions for the public and private sound reinforcement.
Over the years, thanks to a policy of considerable investments in R&D, design and manufacturing, dBTechnologies has gained substantial recognition for some groundbreaking technological innovations, as well as their inherent standards of quality.
In particular, dBTechnologies has been one of the industry’s forerunner in active speaker & digital amplifier technologies, while giving a major emphasis to details and design. A constant research on new materials and technologies, together with the ability to create unique design solutions, are the key ingredients for an ever-increasing market share and success.
Today AEB Industriale's Headquarters are located in Crespellano (Bologna) with a total area of over 10,000 square meters housing the legal and production core, the sales and administrative offices, the warehouses, and the Research & Development department where all dBTechnologies'​ products are designed and developed.
In 2019, the brand is distributed in more than 160 countries worldwide, providing installation companies, rental companies, sound designers and musicians with audio equipment and combining top-quality sound performance with a distinguishable Made in Italy design. 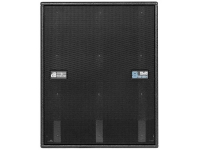