No results found with that criteria :(
ADVANCED SEARCH
You are here: HomeCatalogueAudioDigital Audio MixersAVID VENUE SC48 Used, Second hand
ABOUT THE PRODUCT ABOUT THE MANUFACTURER GLOSSARY

Get the incredible sound quality and reliability of VENUE all in one compact console.

VENUE SC48 combines all I/O and digital signal processing into a single console package, making it one of the most affordable and portable Avid live systems.
Re-create that studio-quality sound live with full plug-in support. Record shows directly to Pro Tools through the built-in audio interface.
And experience the renowned workflow efficiency that only VENUE provides, so you can focus on what matters most mixing the show. 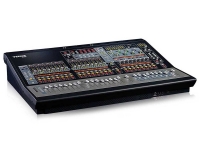