No results found with that criteria :(
ADVANCED SEARCH
You are here: HomeCatalogueLightingLighting DesksChamSys MagicQ MQ40N Used, Second hand
ABOUT THE PRODUCT ABOUT THE MANUFACTURER GLOSSARY


MagicQ MQ40N is the ideal console for small to medium-sized venues in need of advanced lighting control.
The console has very low power consumption and does not require a fan - enabling silent operation for theatrical and corporate shows. MagicQ MQ40N is simple and easy to use for installations, clubs and schools while still featuring advanced features such as MagicVis and MagicHD connectivity. It uses the same software and show formats, enabling compatibility between all products in the MagicQ range.
For outputs, MagicQ MQ40N supports a total of 4 universes either by direct DMX ports on the rear panel or via network protocols such as Artnet or sACN. It can also be connected via network to a PC or Mac running ChamSys free MagicVis lighting visualisation software for full visualisation of the consoles 4 universes at no extra cost.
MagicQ MQ40N can be connected via network to a PC or Mac running ChamSys free MagicHD media player software for output of up to 8 layers of HD media at no extra cost.
MagicQ MQ40N incorporates high reliability components, including durable metal Neutrik connectors. A compact console that lets you control lighting, video and LED pixels is a versatile piece of kit. Because of its size and full range of features, the MagicQ MQ40N also makes an ideal "tech console" for testing equipment or a full rig on stage or in the warehouse.


Since 2003, ChamSys has harnessed the talents of lighting designers, software engineers and hardware developers to innovate and disrupt the field of lighting control. They knew that to overcome the limitations of traditional consoles, they would have to utilize the latest technology and break some conventions.
Those efforts lead to the release of MagicQ software and dedicated consoles, which fulfill the company’s aim creating high performance lighting consoles and softwares engineered to adapt to a wide range of applications for operators at all levels from beginners to professionals. ChamSys has continued to develop new leading edge software and hardware.
ChamSys is commited to meeting the needs of lighting professionals using innovative designs and incorporating latest technology, but always with an eye on our four core design philosophies: Reliability building products that hold up in rigorous touring situations, which are dependable and robust Compatibility designing so that each model and software version plays well with the rest of line.
Connectivity supporting a wide range of protocols and third party products Scalability ensuring that there’s an intelligent upgrade path from novice user to seasoned power user. 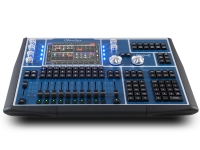