No results found with that criteria :(
ADVANCED SEARCH
You are here: HomeCatalogueAudioAudio Amplifiersd&b audiotechnik D6 Used, Second hand
ABOUT THE PRODUCT ABOUT THE MANUFACTURER GLOSSARY

The d&b D6 amplifier is a dual channel amplifier incorporating digital signal processors (DSP) to provide loudspeaker specific configurations and functions.It is designed for use with d&b loudspeakers except the 2-Way Active mode and the B2-SUB configurations, has both digital and analog signal inputs as well as link outputs, Remote Control and monitoring capabilities and sophisticated protection circuits. It utilizes a switch mode Power Supply with PFC suitable for mains supply voltages 100 V / 115 V / 200 V / 230 V, 50 60 Hz and has a temperature and signal controlled fan to cool the internal assemblies.
It is specifically designed to deliver medium power into low impedance loads between 4 and 16 ohms. A user definable 4-band parametric equalizer and signal delay capability of up to 340 ms are incorporated and can be applied independently to each channel. A signal generator offering pink noise or sine wave program is also incorporated.
The D6 uses its Load monitoring and System check functions to ascertain the status of the loudspeaker impedance. d&b System check verifies that the system performs within a predefined condition, whilst d&b Load monitoring enables an automatic and continuous impedance monitoring. Both can determine the status of an LF or HF driver in systems with multiple Elements, even if these are crossed over passively. All of these functions and parameters can be easily accessed and controlled via the LCD in conjunction with the digital rotary encoder or through the d&b Remote network. 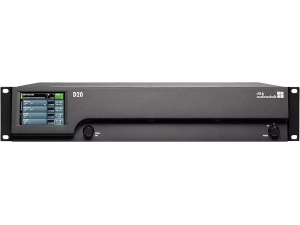 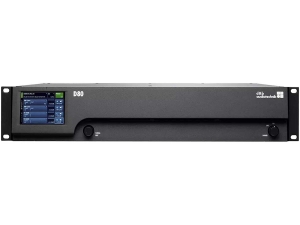 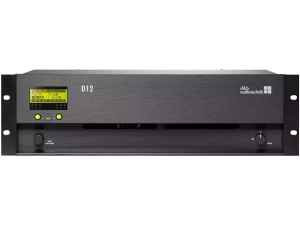 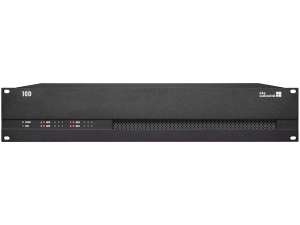 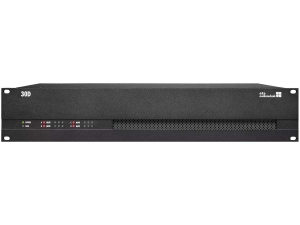 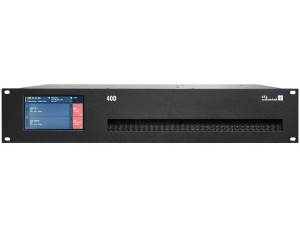 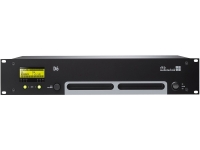