No results found with that criteria :(
ADVANCED SEARCH
You are here: HomeCatalogueAudioDigital Audio MixersDiGiCo SD12 D2-Rack Package Ex-demo
ABOUT THE PRODUCT ABOUT THE MANUFACTURER GLOSSARY

Compact in size but big on features, the SD12 raises the bar as a multi-application digital console at an exceptionally affordable price point. Not only is the SD12 a true sonic powerhouse, it is the first in the SD-Range to feature an integrated recording interface which makes virtual sound checking a snap.
Designed to provide optimum performance in live touring, corporate, install, house of worship, theatre and broadcast environments, the SD12 incorporates the latest generation Super FPGA technology and Core 2 software to deliver unrivalled power and connectivity in a compact frame.
Designed for even easier operation, the SD12's new DVI display output provides an overview of the console, while brighter LED meters and a DiGiCo Lightbar ensure optimum visibility. Dual 15-inch touchscreens, two assignable master faders and advanced surface connectivity is provided in the form of optional DMI cards.

The SD12 boasts 72 channels at 48kHz/96kHz, delivering a wealth of functionality. Standard channel processing across both inputs and outputs includes Channel Delay, Single and Multi-Channel presets, Dual insert points Hi- and Lo-pass filters at 24dB/octave, four-band parametric EQ with band curve selection, DiGiCo's DYN 1 (Compressor, De-esser or Multiband Compressor) and DYN 2 (Gate, Compressor or Ducker).
On board are 119 Dynamic EQ processors which can be assigned to any of the input or output channels; 119 Multiband Compressors and 119 DiGiTuBes. All channels deliver the same pure signal path and feature set, so no matter how you set up your console, you never lose any resources. Within the master section are 16 graphic EQs, 12 digital effects, and up to 12 control groups (VCAs). Using snapshots, engineers can switch between complete configurations at a touch.
The SD12's 36 busses are assignable as sub-groups or auxiliaries, while further configurability comes courtesy of a 12 8 output matrix, dual solo busses, and a Master buss. Unlike all other digital console manufacturers, you don't lose Aux or Group Busses when using the Matrix as they are in addition, including the Master buss. 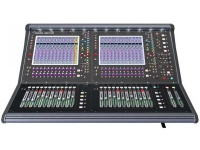