No results found with that criteria :(
ADVANCED SEARCH
You are here: HomeCategoriesAudioLine ArraysL-Acoustics dV-DOSC Package Used, Second hand
ABOUT THE PRODUCT ABOUT THE MANUFACTURER GLOSSARY

The small ``d`` in DOSC refers to the mathematical terminology for the derivative function since dV-DOSC can be considered as a derivative of V-DOSC. dV-DOSC provides the same benefits of Wavefront Sculpture Technology as V-DOSC except in a much smaller format.
We hope this manual will help you to understand the basic theoretical principles behind how the dV-DOSC system works. Understanding these principles will help you to optimally use dV-DOSC and dV-SUB in sound design ? whether for touring or fixed installation. Understanding the concepts behind dV-DOSC and Wavefront Sculpture Technology are just as important as learning the many operational details related in this manual  the more you understand the big picture, the more effectively you will use the system.
dV-DOSC is a complete system approach starting from the basic scientific question of how to effectively couple sound sources then including all aspects of performance prediction, sound design, system installation, rigging, cabling, signal distribution, digital signal processing and system tuning. This turnkey system approach allows for accurate and predictable results, however, in order to achieve the best results you need to understand the theoretical concepts behind how the system works and adopt a methodical approach to sound design and installation. For these reasons, specialized training is necessary to obtain the best results with the system. Some people think that working with dV-DOSC is complicated but once you understand the procedures involved, you save time and - more importantly - obtain better, more predictable results.

Apart from sound quality and the turnkey system approach, there are many other benefits to dV-DOSC. Many readers are already aware of these  if not, they will become apparent throughout the course of this manual. 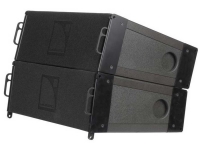