No results found with that criteria :(
ADVANCED SEARCH
You are here: HomeCatalogueAudioLine ArraysL-Acoustics KUDO Line Array Package Used, Second hand
ABOUT THE PRODUCT ABOUT THE MANUFACTURER GLOSSARY

L-ACOUSTICS KUDO is a new generation of line source array offering far more flexibility and possibilities than any other line array to date. KUDO marks a significant evolution in L-ACOUSTICS pioneering Wavefront Sculpture Technology (WST) since WST can now be performed in both vertical and horizontal planes simultaneously.
Two patented DOSC waveguides are incorporated in KUDO, allowing WST to be performed either vertically or horizontally. In parallel, coverage pattern adjustment is available in the perpendicular plane using patent-pending K-Louver technology. Mechanically-adjustable K-Louvers provide directivity control for the mid/high section and allow KUDO to be reconfigured with four different coverage pattern settings.
KUDO combines the functions of a variable-curvature vertical line source array (like V-DOSC) and a constant-curvature horizontal line source array (like ARCS). When used as a vertical line source array, inter-enclosure angles are 0-10° at 1° resolution and the horizontal directivity can be configured as: 50° (symmetric) 110° (symmetric) 25° x 55° (asymmetric) or 55° x 25° (asymmetric). Within the same array, individual enclosures can be configured with different horizontal directivity depending on the shape, width and reverberation properties of the venue, making KUDO extremely flexible with respect to audience geometry matching.
When installed horizontally as a constant curvature line source array, 10° interenclosure angles are employed and the horizontal coverage is 10° x N (where N is the number of enclosures). Vertical directivity can then be configured as: 50° (symmetric) 110° (symmetric); 25° x 55° (asymmetric - up) or 55° x 25° (asymmetric - down).
Given the choice of 4 directivity settings and 2 orientation possibilities, KUDO provides the performance equivalent of 8 different loudspeakers. Having such unprecedented flexibility in a high-power, medium format system makes KUDO truly unique. 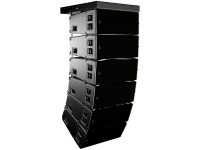