No results found with that criteria :(
ADVANCED SEARCH
You are here: HomeCatalogueAudioOutboardsMeyer Sound Galileo 616 Used, Second hand
ABOUT THE PRODUCT ABOUT THE MANUFACTURER GLOSSARY

The Galileo loudspeaker management system is an elegant hardware and software solution for driving and aligning multi-zone loudspeaker systems. The 2-space, rack-mount Galileo 616 includes six inputs, 16 outputs, and a fully digital matrix processor. The Compass control software provides comprehensive control of all parameters from a Mac, or Windows-based computer. The Galileo 616 is also fully programmable from its front panel for maximum flexibility.
Designed as the perfect complement to Meyer Sound's self-powered loudspeakers, the Galileo loudspeaker management system includes array correction for M Series array loudspeakers, atmospheric correction filters, low- and high-pass filters for subwoofer control, and configuration presets for Meyer Sound loudspeaker systems of various types and sizes.
The Galileo 616 offers an extensive equalization architecture that includes complementary phase parametric filtering and TruShaping low-order equalization on both inputs and outputs. 31-band graphic equalization is also available on inputs.
Equalization parameters are easily edited in the Compass control software, with numeric entry or by graphically dragging frequency bands. Parameters can be adjusted while viewing multiple layers of equalization in a composite graphic plot to achieve the ideal equalization curve. The Compass software's intuitive user interface is the culmination of Meyer Sound's extensive experience optimizing complex loudspeaker systems.
The Galileo 616 features full digital operation with fixed latency across all output channels regardless of any applied processing. It can also be connected directly to the SIM 3 audio analyzer, providing complete measurement and control for integrated audio systems. 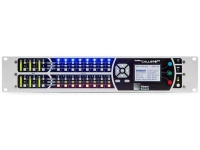