No results found with that criteria :(
ADVANCED SEARCH
You are here: HomeCatalogueAudioAudio AmplifiersNEXO NXAMP 4X4 Used, Second hand
ABOUT THE PRODUCT ABOUT THE MANUFACTURER GLOSSARY

NXAMP is far more complex than a bundled power amplifier and loudspeaker controller. Significant DSP innovations allows multiple digital sense lines to protect at the same time the amplifier and the connected speakers. First the NXAMP4x4 uses a unique dual mains cord, feeding the power supplies with nearly twice the power than most audio amplifiers today, still being extremely easy to connect to any mono or multiple phases mains. To absorb this enormous quantity of current the NXAMP4x4 reveals four independant high power full resonant power supplies working in opposite phase, thus cancelling noise and lowering EMC.
NXAMP4x4 uses advanced custom components based power amplifier design, the ultimate evolution of the Yamaha?s EEEngine technology, offering the sonic purity of conventional class AB but a heat dissipation equaling the class D. Not only the two dual-core DSPs are taking care of the amplifier protection and optimization, but they also redefine the processing standard of NEXO proprietary loudspeaker management technology to a higher sonic performance and reliability level.
With useful features such as full computerless front panel operation, on the fly independant louspeaker per output selection or load monitoring trough GPIO or Ethersound/AES/EBU/Dante network for safety installation, the NXAMP4x4 is ideal for a wide variety of demanding applications. 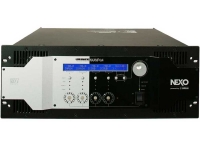