No results found with that criteria :(
ADVANCED SEARCH
You are here: HomeCatalogueLightingHybrid Moving HeadsROBE Lighting Robin Spikie Used, Second hand
ABOUT THE PRODUCT ABOUT THE MANUFACTURER GLOSSARY

Encompassing all the new technologies develeoped for the MMX Spot, the WashBeam provides the lighting designer with a huge range of features and effects in a single fixture.

The Phillips Platinum 35 light source together with the Robe MMX optical system, produces a light output exceeding most traditional 1200 W products. Robin MMX WashBeam uses innovative internal motorized barndoors module for creating different unique shapes and chases, in the which also simulates barndoor effects. The module consists of four individually controllable blades and is rotatable by 180 degrees. With the change of a lens, the WashBeam switches from a super-fl at, even wash - extendable out to 54 degrees into a tight 3 degree Beam effect machine - both options retaining all the key performance features of the MMX family - including full CMY colour mixing, saturated colour wheel, variable CTO, variable Hot-Spot control, motorised Zoom & Focus and Rotating indexable glass gobos - all adding up to a real advantage over other existing Beam products. 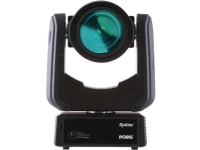