No results found with that criteria :(
ADVANCED SEARCH
You are here: HomeCategoriesLightingFollow SpotsROBERT JULIAT CYRANO HMI 2500 Package Used, Second hand
ABOUT THE PRODUCT ABOUT THE MANUFACTURER GLOSSARY

For that little bit more!

Cyrano's narrow beam angle is suited to super-long throw distances found in the largest theatres and stadia. Its unique dimmer shutter gives Cyrano a superb dimming ability surpassing even that of Aramis making it indispensable for opera houses and large TV shows.


Established since 1919, Robert Juliat is a French manufacturer of high quality lighting equipment for theatres, opera houses, events and architecture.
World leader in followspot design, including the Award winning 1200W Super Korrigan,1800W Victor and the ground breaking 4000W HTI Lancelot, the product range also includes tungsten, discharge and LED zoom profiles, Fresnels, PCs and dimmers.
All fixtures are designed for ergonomic perfection, optical and mechanical excellence and cover every need from the smallest theatre to the largest spectacular. 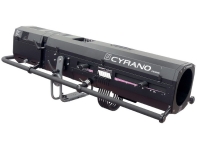