No results found with that criteria :(
ADVANCED SEARCH
You are here: HomeCatalogueLightingWash Moving HeadsVari-Lite VL3000 Wash Luminaire Used, Second hand
ABOUT THE PRODUCT ABOUT THE MANUFACTURER GLOSSARY

Proudly built in the USA, the VARI*LITE VL3000 Spot luminaire sets new standards for imagery, beam control, color and brightness in spot luminaires.
The VARI*LITE VL3000 Spot luminaire features a 6:1 zoom optics, CYM color mixing, variable CTO color temperature correction, a six-position color wheel, three gobo/effects wheels, a beam size iris and separate dimmer and ultra-fast strobe mechanisms. A standard pallet of gobos, effects and colors is provided with the unit. Custom gobos, effects and color are available.
An upper enclosure houses the control electronics as well as the arc power supply for the 1200 watt short arc lamp. The arc power supply is power factor corrected for efficient power distribution.
The VL3000 Spot luminaire can be controlled from a wide variety of DMX512 consoles.
The luminaire is the same size as the VL3000 Wash luminaire, providing a consistent hang configuration and appearance no matter which luminaire type is required.


VARI*LITE is the brand name of one of the first automated, variable-colour stage lighting systems to be created. Their intelligent lighting fixtures are commonly used in theatre, concerts, television, film and corporate events.The company has won three Primetime Emmy Awards for technical achievement: in 1991, for Outstanding Achievement in Engineering, in the development of the Series 200 system; in 1994, for the development of the VL5 and in 2001 for Outstanding Achievement in Engineering for the Virtuoso console. 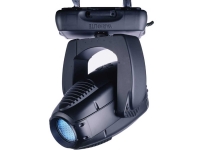