No results found with that criteria :(
ADVANCED SEARCH
You are here: HomeCatalogueAudioSubwoofersL-Acoustics K1-SB Package Used, Second hand
ABOUT THE PRODUCT ABOUT THE MANUFACTURER GLOSSARY

The K1-SB is a recommended subwoofer complement for the K1 or K2 line sources. Operating down to 30 Hz, it allows augmenting the sub-low resources of the systems, by reinforcing the contour or enhancing the throw capability in the low end.
The K1-SB contains two 15?? transducers in a bass-reflex tuned enclosure. It provides exceptional impact, high sensitivity, low thermal compression and reduced distortion. The vents feature a progressive profile allowing laminar airflow and reduced turbulence noise, even at the highest operating levels. These combined properties contribute to the sonic qualities of the K1-SB in terms of precision and musicality. The cabinet is made of first grade Baltic birch plywood to ensure maximum acoustical and mechanical integrity.
The K1-SB 4-point rigging system is integrated in the cabinet and is fully compatible with K1 and K2 systems. K1-SB subwoofers can be flown as a standalone array or at the top of a vertical array composed of K1, K2 or KARA enclosures.
The K1-SB is exclusively driven and amplified by the LA8 controller. This one ensures linearization, protection, and optimization for the loudspeaker system in its different configurations, including dedicated factory presets for the CONTOUR and THROW configurations. 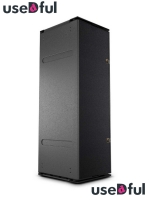