No results found with that criteria :(
ADVANCED SEARCH
You are here: HomeCatalogueAudioIn Ear SystemsAVIOM A-16D-A-16II Personal Monitor Package Used, Second hand
ABOUT THE PRODUCT ABOUT THE MANUFACTURER GLOSSARY

Aviom?s A-Net Distributors, the A-16D and A-16D Pro, provide support for parallel connections of multiple Pro16 devices, including the A360, A-16II and A-16R Personal Mixers. Each accepts one A-Net input and provides eight identical A-Net outputs using standard Cat-5e cables.
The 2U A-16D Pro is powered by an internal switching power supply, with a detachable power cord and IEC power inlet on the rear panel. Isolated (floating ground) DC power is supplied to eight A-Net outputs for providing remote power via Cat-5e to Pro16 Personal Mixers.
A single unpowered A-Net Thru is provided for daisy-chaining additional A-Net Distributors or other Pro16 devices, such as the AN-16/o v.4 Output Module. All network connections on the A-16D Pro use heavy duty locking Neutrik EtherCon connectors.
Inside the A-16D Pro is Aviom?s unique power sub-system, which virtually eliminates the possibility of introducing hum or ground loops into an audio system. alternatively, the half-rack space A-16D is powered by an external DC power supply and provides remote power over A-Net on a per-jack basis, using optional external PS-120 DC power supplies.
A-Net network connections use standard RJ45 jacks. The A-16D is a cost-effective method for distributing A-Net and power to Personal Mixers, providing redundant cable runs to back-up modules, or refreshing an A-Net signal where cable runs exceed 500ft/150m.
An unlimited number of Distributors can be used in an A-Net network.

The Aviom A-16D Pro shall employ the Aviom A-Net Pro16 audio transmission protocol to provide one channel of A-Net input and eight channels of A-Net data distribution for devices connected in an A-Net network. It shall digitally transmit full-bandwidth, high-quality audio by employing the Aviom A-Net Pro16 audio transmission protocol.
Front panel connectors shall be of the EtherCon RJ45 type. LED indicators for power and A-Net shall be provided.
The unit shall be powered from an internal universal power supply (110 to 240 VAC). It shall provide DC power to the eight A-Net Out jacks to power Pro16 Personal Mixer products. It shall be UL and CE listed. Rear panel features shall include an AC power receptacle with fuse and a detachable AC cable. The front panel shall include an AC power switch.
Its dimensions shall be 19 inches wide, 14.25 inches deep, and 2U (3.5 inches) high. Its net weight shall be 12 pounds, and its steel chassis shall be finished in blue. The unit shall be Aviom, Inc. model A-16D Pro A-Net Distributor.

The A-16II Personal Mixer is the industry standard solution for delivering high quality monitoring control directly to performers on stage and in the studio. Each A-16II Personal Mixer provides independent mix control of sixteen channels, including channel volume, pan/stereo spread, and grouping, as well as master volume and tone controls. Additionally, each Personal Mixer can store and recall up to sixteen independent custom mix snapshots.
Individual channels, stereo pairs, and channel groups can be soloed or muted. The Global Trim function can be used to decrease every channel?s volume 6dB, providing additional headroom for mixing a selected channel.
The TRS audio output from the A-16II can be connected to a range of devices, including wired in-ear monitors (IEMs), transmitters for wireless IEMs, headphones, powered monitors, and power amps. The A-16II features unique high voltage and high current output circuitry which auto-detects stereo and mono connections.
Audio is delivered to the A-16II from a Pro16 input module or console card over a single Cat-5e cable, using Aviom?s ultra-fast A-Net Pro16 technology. A-Net provides plug-and-play operation, long cable runs (up to 500ft/150m between devices), and sub-millisecond transmission of 24-bit digital audio.
Power can be supplied to the A-16II through an optional external DC power supply or over the Cat-5e cable, using an A-16D or A-16D Pro A-Net Distributor. Personal Mixers can be daisy-chained (with external DC power supplied locally) or connected in parallel using an A-Net Distributor.
A-16II Personal Mixers can be used in virtually any combination with other Pro16 devices, including the rack-mounted version of the Personal Mixer, the A-16R, and the A360.

The Aviom A-16II Personal Mixer shall provide stereo mixing of sixteen channels of audio transmitted via an A-Net network over Cat-5e UTP cable. It shall provide full-bandwidth audio by employing the Aviom A-Net Pro16 audio transmission protocol. It shall employ 24-bit D/A converters with a 44.1/48kHz sample rate.
It shall have a frequency response from 4Hz to 22kHz, +0/-0.2dB or better, with total harmonic distortion no more than 0.003% at 1kHz with a +4dBu input signal. Maximum level (RMS) shall be 1.0 watt at 100 ohms. The audio output shall be capable of being connected to headphones or line-level audio sources. Output impedance shall be 32 ohms.
Front panel features shall include master volume, treble and bass controls, LED indicators for Channel Volume and Pan, lighted channel-select buttons, mute and solo functions. A front-panel A-Net Active LED shall be provided. The unit shall be capable of storing sixteen mixes as presets in internal memory.
Rear panel features shall include a detachable DC power cord. The unit shall be powered from an external universal power supply (input voltage 100 to 240 VAC; output voltage 18-24 VDC, 0.5 amps). It shall be UL and CE listed.
The rear panel shall have RJ45 connectors for A-Net digital signal input and output. It shall employ a ?? TRS jack for headphone/line-level output.
Its dimensions shall be 10.75 inches wide, 5.6 inches deep, and 2.25 inches high. Its net weight shall be 3.4 pounds, and it shall be finished in blue. The unit shall be Aviom, Inc. model A-16II. 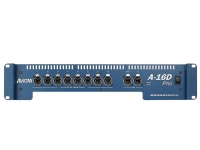