No results found with that criteria :(
ADVANCED SEARCH
You are here: HomeCatalogueLightingWash Moving HeadsClay Paky Alpha Wash Halo Used, Second hand
ABOUT THE PRODUCT ABOUT THE MANUFACTURER GLOSSARY

The Alpha Wash Halo is a lightweight silent washlight with 1000 W (3200 K) halogen lamp, primarily for theatre and television. It is ideal for all lighting designers who are looking for the typical characteristics of a halogen lamp: uniform light, warm shade of colour and gradual dimmer. It has a 14°- 64° linear zoom, CMY colour mixing, linear frost effect, electronic dimmer, adjustable ovalizer filter, stop/strobe and an extraordinary motorized top hat, which ensures perfect light beam control.


Claypaky S.p.A., a subsidiary of the German lighting manufacturer Osram, is a developer of professional lighting systems for the entertainment sector (theatre, television, concerts, nightclubs and outdoor events ) and for architectural applications.
The company is based near Bergamo, about 40 km from Milan, Italy. It operates from a modern facility housing its R&D labs, main production plant and quality control, sales and administration departments. At present Clay Paky exports 95% of its production through a global sales and service organization represented by a dealer network active in more than 80 countries around the world.
The Claypaky company was founded in August 1976, taking its name from the shortened, anglicized form of the name of its founder, Pasquale (Paky) Quadri, one of the first entrepreneurs to realize that technological developments in lighting would have an enormous future in the show business and entertainment world.
In 1982 Claypaky presented the Astrodisco, which used a single lamp to project multiple rays of colored light across ceilings and dance floors. Five years later it launched Brilliant, a digitally controlled moving head and forerunner of a new generation of “intelligent” projectors.
This was followed in 1988 by the programmable Golden Scan, a moving mirror projector and the first luminaire to implement stepper motor technology instead of servo motors. Acclaimed by the specialised press as “the world’s most popular and best-selling projector”, the Golden Scan became a commonly used lighting effect at nightclubs and rock concerts during the late 1980s and the 1990s.The London rock band Klaxons claimed the projector was the inspiration behind their light-themed, hit single Golden Skans.
Since 2000, Claypaky has also been developing its offer for indoor and outdoor architectural applications. In 2002 it moved its headquarters to a new industrial complex in Seriate (Bergamo), achieving certification for compliance with the UNI EN ISO 9001 quality standard that same year.
Claypaky has experienced constant growth, reporting revenues of more than 50 million euro for 2011, up by over 50% from 2010 (33 million euro). It has a workforce of nearly 200 people. In 2014 the Claypaky founder Pasquale Quadri died and the company has been acquired by Osram. 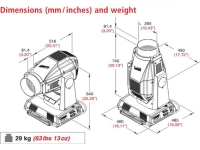