No results found with that criteria :(
ADVANCED SEARCH
You are here: HomeCatalogueAudioSubwoofersL-Acoustics KS21 Used, Second hand
ABOUT THE PRODUCT ABOUT THE MANUFACTURER GLOSSARY

KS21 is a compact reference subwoofer designed to extend the bandwidth of A15 and A10 systems. KS21 features one high excursion, direct radiating 21" transducer mounted in a bass-reex tuned enclosure.
KS21 operates from 29 Hz to 60 Hz when associated with A15, or 30 Hz to 100 Hz when associated with A10. KS21 features L-Vents that substantially reduce turbulence and port noise at high levels while also increasing LF eficiency.
The KS21 frequency response is optimized to couple perfectly with both systems. KS21 features a two-point, integrated rigging system that is compatible with A15. Combinations of KS21 and A15 can be flown or stacked to form a full range line source. KS21 also integrates a threaded insert to enable pole-mount configurations of A15 or A10.
KS21 can be deployed in standard or cardioid congurations with dedicated presets, for flown and stacked deployment. 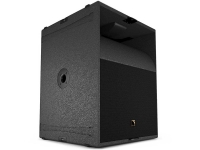