No results found with that criteria :(
ADVANCED SEARCH
You are here: HomeCategoriesAudio EquipmentAudio AmplifiersLAB.Gruppen FP 6000Q Used, Second hand
ABOUT THE PRODUCT ABOUT THE MANUFACTURER GLOSSARY

Over the past decade, the tight and transparent sound of Lab.gruppen touring amplifiers has earned the praise of renowned FOH engineers and leading sound rental companies worldwide. FP 6000Q, the second four-channel model of the FP+ Series, continues this tradition. At the core of the FP 6000Q’s performance is the patented Class TD output stage, a breakthrough amplifier topology that approaches the exceptional efficiency of Class D while retaining the sonic purity of proven Class B designs. Further contributing to the remarkable efficiency of the FP 6000Q is a Regulated Switch Mode Power Supply (R.SMPS), which gives the added benefit of stabilizing rail voltages to the output even with wide fluctuations of mains voltage. A highly refined and updated circuit layout optimizes the interaction of R.SMPS and Class TD to produce the extraordinary power and channel density of the FP 6000Q.
To keep its cool under extreme demands, the FP 6000Q relies on Lab.gruppen’s proprietary Intercooler. This innovation uses thousands of copper fins to multiply the exposed heatsink surface’s rapid heat dissipation. Also, all output devices are mounted transverse to the airflow for uniform cooling. As a result, the FP 6000Q delivers Lab.gruppen’s’ trademark “all the power, all the time” with no degradation of sonic performance.
To maximize headroom in any application, the FP 6000Q offers adjustable input gain along with Lab.gruppen’s exclusive Voltage Peak Limiter (VPL). Adjustable on a per-channel basis, VPL optimizes the output for any load, from a single massive subwoofer to a series of HF compression drivers.
The comprehensive warning and protection features on the FP 6000Q safeguard output circuits and connected loads while also extending amplifier life and minimizing the chance of service interruptions. Whether it’s a matter of faulty wiring, improper use, or extreme ambient temperatures, the FP 6000Q gives clear indication of any problems. Automatic protection measures engage only at critical thresholds, and conditions are re-checked every six seconds with normal operation resumed when measurements return to nominal.
The FP 6000Q is shipped with a NomadLink network interface as standard. In conjunction with DeviceControl software, NomadLink allows monitoring of all key amplifier parameters and remote control of power on/off, channel mutes, and channel solo functions. (NomadLink requires the separate NLB 60E NomadLink Bridge & Network Controller). 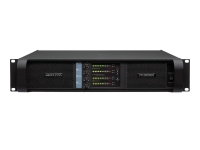