No results found with that criteria :(
ADVANCED SEARCH
You are here: HomeCatalogueAudioConventional LoudspeakersMartin Audio LE100 Package Ex demo/ Like new
ABOUT THE PRODUCT ABOUT THE MANUFACTURER GLOSSARY
LE100

The LE100 is an extremely compact, two-way passive monitor. It features a 12” (300mm) LF /1” (25mm) exit HF Coaxial Differential Dispersion driver to distribute sound evenly over the listening plane. The LF driver section has a 2.5” (65mm) voice coil and an efficient motor system with an aluminium demodulating ring to minimise distortion. The coaxial HF driver utilises a 1.75” (44mm) polyimide dome and features a low-compression phase-plug to reduce non-linearity associated with overly-high compression ratios 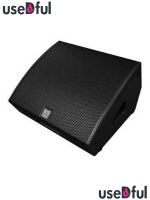