No results found with that criteria :(
ADVANCED SEARCH
You are here: HomeCatalogueAudioDigital Audio MixersMIDAS Audio DL 251 Used, Second hand
ABOUT THE PRODUCT ABOUT THE MANUFACTURER GLOSSARY

The Midas DL251 is a 5U fixed-configuration I/O unit with 48 mic/line inputs and 16 mic/line outputs. Limited to analogue connections, the DL251 fives you a cost-effective solution if you don`t need the flexibility of Midas modular I/O hardware. You get MIDI in, out and thru - plus one Ethernet control - standard.
Three AES50 ports handle the (n+1) redundant digital audio interface. The DL251 can be switched between 96kHz and 48kHz from the front panel. A rear-panel "mute all outputs" button makes for easy on stage re-patching. The unit is also equipped with dual redundant PSUs. 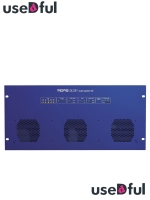