No results found with that criteria :(
ADVANCED SEARCH
You are here: HomeCatalogueVisualVideo Data ProjectorsPanasonic PT-DW10000E Used, Second Hand
ABOUT THE PRODUCT ABOUT THE MANUFACTURER GLOSSARY

In digital cinema, it?s how we fill the white space of the screen with something amazing.

Cinematographer David Leitner was looking for a projector to premiere his new Checkerboard Film Foundation?s documentary film ?Ellsworth Kelly: Fragments.? Since the film featured fine art paintings, it was imperative to reproduce the texture, tone and color palette on the screen so that viewers could fully appreciate the art. Shooting and projecting in full-HD are also crucial to capturing both the filmmaker?s and the artist?s original intents of their respective images. Also, since the film was shown during a fundraiser where ticket costs were $250 apiece, the audience?s expectations were very high. Thankfully, Panasonic was able to significantly exceed their expectations with amazing images.
Leitner discovered the Panasonic difference last summer when he used the PT-DW7000 projector to teach a course at the International Film & Video Workshops in Rockport, Maine. The experience made such an impression on him that he worked with Panasonic to secure a projector for this film, and they recommended the PT-DW10000.
As an iconic painter and sculptor, Ellsworth Kelly is very careful in selecting the exact color hues he wants. So the projector needed to display his colors with an extremely high degree of accuracy. Members of the audience, the Alliance Francaise projection staff, and even Ellsworth Kelly mentioned how amazed they were at the film?s vivid colors and overall image quality. According to Leitner, that?s exactly what the PT-DW10000 delivered. ?It was the best projector we could have possibly chosen. Plus, it plugged into a standard 120-volt outlet, which isn?t normal for a DLP ? projector of this high caliber. The projector?s 75-foot throw distance also made it possible to place the projector in the control room, rather than on a stand in the audience. The DW10000?s controls and inputs are efficiently organized on the side ? that made it easy to operate. And its LED lights illuminated the controls, which is a nice touch. It was also very lightweight. I may sound like a commercial but, seriously, there was no downside to this projector.?
Panasonic projectors provide exciting new ways to inspire artists, filmmakers, and cinematographers. They?re also great for bringing a movie in on budget.

Cinematographer David Leitner was looking for a projector to premiere his new Checkerboard Film Foundation?s documentary film ?Ellsworth Kelly: Fragments.? He had an absolute need to reproduce the texture, tone, and color palette on the screen so that viewers can fully appreciate the art. Shooting and projecting in full HD are also crucial to capturing both the filmmaker?s and the artist?s original intents of their respective images.

Members of the audience, the Alliance Francaise projection staff, and even Ellsworth Kelly mentioned how amazed they were at the film?s vivid colors and overall image quality. 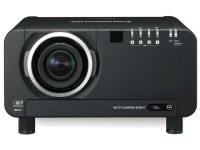