No results found with that criteria :(
ADVANCED SEARCH
You are here: HomeCatalogueAudioDigital Audio MixersSoundcraft Vi4 Package Used, Second hand
ABOUT THE PRODUCT ABOUT THE MANUFACTURER GLOSSARY

Only months after the introduction of the highly successful Soundcraft Vi6, the Vi Series of digital live sound consoles has been extended with the new Soundcraft Vi4 model, offering all the functionality and facilities of the Soundcraft Vi6, but in a smaller, more compact footprint more suited for space-conscious applications such as Theatres, Houses of Worship and venues or clubs with space-limited mix positions.
In just under 1.5m/5 feet, the Soundcraft Vi4 offers access to 96 inputs on 24 faders, with a total of 35 output busses available for use as masters, groups, auxes or matrices. All other features of the Soundcraft Vi6, such as the highly acclaimed Vistonics II touch-screen user interface, Soundcraft FaderGlow fader function display and the unequalled audio quality are inherited by the Soundcraft Vi4.

To compliment the Soundcraft Vi4, an offline editor (Virtual Vi) is available. See below in Downloads section. 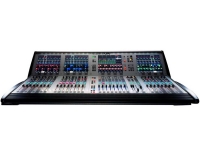