No results found with that criteria :(
ADVANCED SEARCH
You are here: HomeCatalogueAudioDigital Audio MixersYamaha Pro Audio CL5-Rio3224-D Package Used, Second hand
ABOUT THE PRODUCT ABOUT THE MANUFACTURER GLOSSARY

The standards stay, but innovation never ends.
The pursuit of perfection is ongoing and will probably never end, but along the way Yamaha has introduced a number of innovations that have become industry standards offering performance and familiarity that discerning users continue to demand. By definition, ?standards? are best kept as they are. With evolutionary refinements, of course.
Yamaha CL series digital mixing consoles represent a new level of refinement. They offer an evolved experience in accessible mixing, plus sonic purity with sound shaping capabilities that will give the most imaginative engineer unprecedented creative freedom. The CL series embodies the leading standards in live sound in their most advanced, most expressive form.


Yamaha Pro Audio, Inc. is a company which is part of the Yamaha Corporation group. It offers a complete line of beginner professional audio products for the live sound and sound reinforcement markets. It has a long history of introducing significant products for the professional audio market such as the PM-1000 modular mixing console, the REV1 and SPX90 digital signal processors, and the 01, 02R, PM1D, PM5D, QL5, M7CL, CL5, and PM10/7 Rivage digital mixing consoles.
Yamaha products have received the most nominations in the area of technical achievement in the TEC Foundation TEC Awards 20-year history.

The first PM mixer manufactured by Yamaha was the PM200. Introduced in 1972, it was a monaural mixer with unbalanced inputs and outputs.
The PM400 was an upgraded mixer with a stereo bus and balanced inputs and outputs.The Yamaha PM1000 mixing console was a significant product in the professional audio industry because of its many advanced features and reasonable price. Introduced in 1974 it incorporated many innovative features such as a modular design using channel strips and output strips, a 4 bus design, and an output matrix mixer. Because it was manufactured by an established company it was readily accepted in many audio industries including sound reinforcement, recording, and audio for video. It also established a reputation for being rugged in the often abusive environment of touring sound reinforcement.
The PM2000 featured a hard chassis construction for rigidity and durability on the road. "One of the tests we are still using is our 'flight case test'. During prototyping we order a custom flight case - not even a very sturdy one - and place the console in it. The flight case is stood on end, and then tipped over in both directions and allowed to fall to the floor. If the console powers up immediately and works flawless after that ordeal, then it passes the test." The PM3000 was the first mixer to use voltage-controlled amplifiers (VCAs) in a mixer designed specifically for sound reinforcement. It used a custom VCA design using discrete hybrid ICs The PM4000 introduced stereo auxiliary buses and fully parametric Equalization on the input channels.
The PM5000 was a hybrid analog mixer with a digital control system which provided scene recall. In 1999, Yamaha debuted a first of its kind, all digital large format console, The PM1D system. With scalable I/O configuration the total channel count could be brought up to 320 mic inputs. Though, to achieve this impressive channel count, the system required multiple modular I/O boxes along with separate Digital Signal Processor(DSP) racks, power supply racks, and computer system engines.
Yamaha's next desk, the PM5D did away with the external rack system, reducing the channel count to 48 mic pres, and requiring only an external power supply unit. The Yamaha PM5D-RH(remote head-amp) was all of the functionality of a PM5D in a 10 space rack that only required a PM5D-RH control surface. In 2007, Yamaha won a Technical Grammy for its NS-10 studio monitor, a speaker that dominated the mixing of pop and rock music throughout the world for at least 20 years. The speaker was inducted into the Mix magazine TECnology Hall of Fame in 2008. The M7CL and its successor, the CL series are both among Yamaha's more affordable line. The CL Series was first to incorporate the Dante protocol. In 2014, Yamaha announced the release of a new PM series digital console, the PM10 Rivage system, equipped with Rupert Neve Designed "Silk" modeling pre-amps. 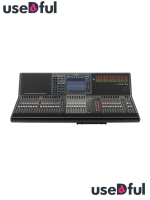