No results found with that criteria :(
ADVANCED SEARCH
You are here: HomeCatalogueAudioDigital Audio MixersAllen & Heath dLive S3000-DM48 Package Used, Second hand
ABOUT THE PRODUCT ABOUT THE MANUFACTURER GLOSSARY

The S3000 is a small-footprint yet powerful control Surface for the dLive MixRack, with the addition of built-in audio I/O and audio networking ports. It features 20 faders over 6 layers, a 12″ capacitive touchscreen and the innovative Harmony UI for the fastest workflow in the industry.

Where many digital consoles try to recreate the experience of using an analogue mixer, dLive is a true digital native, drawing on our familiarity with the ubiquitous smartphones and tablets that we all use without thinking. The single or twin 12" capacitive touchscreens on the dLive consoles feel instantly familiar, responding to every pinch, swipe, drag and drop exactly how you'd expect them to. Bespoke 'widget' areas can also be set up on the screens to keep track of scenes, meters, FX and other custom controls. The screen is framed by a set of one knob / one function rotary controls, allowing the creativity and immediacy of tactile control over key processing functions, working in harmony with the visual feedback displayed on the screen. The rotary knobs have been prototyped 20+ times to achieve optimal grip and precision control, and feature RGB illumination, with colours mapped to functions for instant visual orientation.

As systems become ever more complex and as I/O counts grow exponentially, engineers can find themselves feeling increasingly removed from the action on stage as they are drawn more and more into managing the arsenal of technologies at their disposal. Throughout the dLive design process our guiding aim has been to create fast and transparent workflows that allow the engineer to focus on the mix, not the mixer. The dLive layout is fully customisable, allowing the user to create a mixing interface that matches their own mental map of the show. Every input or mix can be assigned to any and every bank and / or layer, virtual scribble strips allow inputs and mixes to be clearly named and colour coded for at-a-glance navigation, and the engineer has no less than 26 assignable SoftKeys at their disposal, plus 3 pages of 6 assignable rotaries per screen.

Maybe it's no coincidence that our lead mechanical designer on the dLive project used to be a tank commander. All dLive consoles have been designed to deliver the optimal balance between strength and weight, employing higher grade metal on the sides and folded steel at key points for added rigidity. Not only does every console, MixRack and expander have dual power supply slots for redundancy, but we’ve also employed the same rugged, hot-swappable PSU design across the range for maximum peace of mind and minimum inventory. Dual redundancy is also built into every audio connection throughout the system. We have also paid particular attention to console illumination, conducting rigorous trials to ensure that dLive excels in the sunny, outdoor settings where many digital consoles become almost unusable. 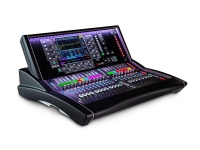