Whether you are saving a setup for later, or need to copy a setup to multiple units, the incorporated USB back up and restore functionality makes configuration simple and efficient. ImagePRO-II is easily controlled via the front panel, browser or a mobile device. Featuring the fastest automatic source acquisition available, the ImagePRO-II excels in automatically acquiring and locking to any input signal. On the output side, ImagePRO-II can also automatically determine the format of the attached display optimizing its output resolution to match the display's resolution.

As the ImagePRO-II is built for the live event industry it has been designed with the road in mind. With features like field replaceable DVI connectors, 1 RU form factor and professional EtherconTM connector ImagePRO-II supports the demanding environment of any live event.

ImagePRO-II is offered in five models: standard, dual output, audio, dual output and audio and Jr. The standard model offers all of the advanced features you need and expect to find in ImagePRO. In addition to the standard features, the dual output model can convert independently one input signal to two separate outputs at different resolutions. Furthermore, the dual model offers stereoscopic 3D conversion capability. The audio option allows for a wide range of dis-embedding and embedding options between the HDMI, DisplayPort and SDI signals and the Analog and Digital AES signals available on the DB-25 Audio board.


Barco NV is a Belgian technology company that specializes in digital projection and imaging technology, focusing on three core markets: entertainment, enterprise, and healthcare.It employs 3600 employees located in 90 countries. The company has 400 granted patents.
Barco is headquartered in Kortrijk, Belgium, and has its own facilities for Sales & Marketing, Customer Support, R&D and Manufacturing in Europe, North America and Asia-Pacific. Shares of Barco are listed on Euronext Brussels.Barco sells its ClickShare products to enable wireless projection from sender devices to receiver displays.Barco is an acronym that originally stood for Belgian American Radio Corporation.
Barco was founded in 1934 in the town of Poperinge, in the Flemish-speaking region of Belgium. Founder Lucien de Puydt's initial business was to assemble radios from parts imported from the United States – hence the name of his company, the Belgium American Radio Corporation, or "Barco". Radio pioneer Camiel Descamps gave the company a new start in 1941 in Kortrijk after founder Lucien Depuydt died. His wife Maria-Anna Reyntjens and his brother-in-law Joseph Versavel assisted him. Later on, also Elie Timmerman joined them. Starting from their office in Kortrijk, the company started to grow and spread around 90 countries across the globe.
In 1949, Barco started developing a multi-standard television that accepted different signal standards, becoming a leader in that field. A jukebox called Barc-O-Matic was sold from 1951. In 1967, it was one of the first European companies to introduce color TV. Building on this, it then entered the professional broadcast market in the late 1960s, supplying TV monitors to broadcasters.
From the 1960s onwards, Barco branched out into numerous other activities, which included mechanical components for industrial use, and quality control monitoring for the textile and plastics industries. In 1967, Barco became the first European manufacturer to produce transistor-based portable televisions.
Barco first entered projection technology in 1979 when it pioneered the development of cathode ray tube (CRT) projection aboard airplanes. Over the following years, it gradually focused solely on professional markets. In the mid-1980s, Barco became a main projection technology supplier for computer giants IBM, Apple and Hewlett-Packard. In the late 1980s, it entered the Brussels stock market. By 1991, Barco's market share in the graphics projection market alone reached 75%, and the company had established offices across the world, including regional headquarters in the United States and East-Asia. Through the 1990s and the first decade of the new millennium, Barco developed and marketed new display technologies such as liquid crystal display (LCD), light-emitting diodes (LED), Texas Instruments' Digital Light Processing (DLP), and later, liquid crystal on silicon (LCoS). It now covers markets that include media and entertainment, security and monitoring, medical imaging, avionics, 3D and virtual reality, digital cinema, traffic control, broadcast and training and simulation.
In 2018, Barco entered into a joint venture with China Film Group Corporation (CFG), Appotronics and CITICPE to commercialize each company's products and services for the global cinema market excluding mainland China: Cinionic. In Barco's case, this involved the company's cinema projectors. 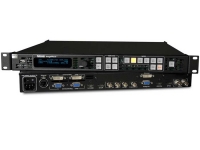