No results found with that criteria :(
ADVANCED SEARCH
You are here: HomeCatalogueAudioSound Systemsd&b audiotechnik Q1-Q-SUB Sound Package Used, Second hand
ABOUT THE PRODUCT ABOUT THE MANUFACTURER GLOSSARY

The Q1 is a passive 2-way loudspeaker housing two 10" LF drivers positioned in a dipolar arrangement and a 1.3" HF compression driver fitted to a toroidal waveshaping device. The 75° constant directivity horizontal dispersion pattern is maintained down to 400 Hz, while the vertical HF dispersion of 15° allows the Q1 to be used to construct vertical columns that produce a curved coherent wavefront. The mechanical and acoustical design of the cabinet enables vertical splay angles to be set between 0° and 14°. Q1 cabinets can therefore be used in vertical configurations starting from two cabinets with a 15° to 30° dispersion, up to 20 cabinets with a fully user and venue defined vertical profile.
The Q1 cabinet is constructed from marine plywood, incorporates a pair of handles and has an impact resistant paint finish. The front of the loudspeaker is protected by a rigid metal grill covered with replaceable acoustically transparent foam, and two EP5 or NL4 connectors wired in parallel are mounted on the rear panel.

The Q-SUB is an actively driven low compression bass-reflex loudspeaker fitted with a high excursion 18" driver. d&b SenseDrive technology is available when powered by the D12 amplifier. The Q-SUB is mechanically compatible with the Q1 and Q7; ten sockets in the front grill and side panels for Q-Series rigging components permit use in various combinations, either flown or ground stacked.
The Q-SUB cabinet is constructed from marine plywood with an impact resistant paint finish, a pair of handles, four heavy duty wheels and an M20 threaded flange in the top panel to accept a loudspeaker stand. The front of the loudspeaker cabinet is protected by a rigid metal grill covered with replaceable acoustically transparent foam and two EP5 or NL4 connectors wired in parallel are mounted on the rear panel. Two runners protect the bottom of the cabinet from scratching; these are located in correspondingly shaped recesses in the top panel to prevent movement when stacked. 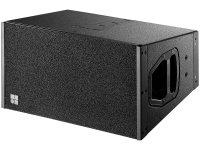