No results found with that criteria :(
ADVANCED SEARCH
You are here: HomeCategoriesAudio EquipmentConventional LoudspeakersEastern Acoustic Works SM84 Used, Second hand
ABOUT THE PRODUCT ABOUT THE MANUFACTURER GLOSSARY

The SM84 is a truly unique high-output two-way stage moni-tor. In addition to a revolutionary 4x 8-in low frequency driv-er configuration and split baffle design, the SM84 employs a1.4-in exit neodymium compression driver on a unique 40°Hx 90°V angled-front horn. It is capable of 139dB SPL peak out-put.
The two-way full range loudspeaker system shall incorporate afour 8-in LF transducers and a 3-in voice coil/1.4-in exitneodymium compression driver. Powering mode is bi-ampli-fied.
The LF drivers shall be mounted in a vented enclosure tunedfor optimum low frequency response. The HF driver shall beloaded on a constant directivity horn with a nominal coveragepattern of 40° (h) x 90° (v).
System frequency response shall vary no more than ±3 dB from60 Hz to 17 kHz measured on axis. The LF shall produce aSound Pressure Level (SPL) of 99 dB SPL on axis at 1 meterwith a power input of 1 Watt, and the HF shall be capable ofproducing an output of 110 SPL on axis at 1 meter. The LFshall handle 1000 Watts of amplifier power (continuous) andhave a nominal impedance of 4 Ohms. The HF shall handle 200Watts of amplifier power and have a nominal impedance of 8Ohms.
The loudspeaker enclosure shall be irregularly triangular inshape with its baffle angled up 53°. It shall be constructed ofmulti-ply, void-free cross-grain-laminated Baltic birch ply-wood and shall employ extensive internal bracing. It shall befinished in wear-resistant textured black paint. Input connec-tors shall be 4x Neutrik NL4 Speakon (2 per side).
The front of the loudspeaker shall be covered with a powder coated perfo-rated steel grille backed with open cell foam to protectagainst dust.The two-way full range loudspeaker shall be the EAW model SM84.


Eastern Acoustic Works (EAW) is an American manufacturer of mainly professional audio reinforcement tools, such as loudspeaker systems and processors. From 1978-1988 it was located at 59 Fountain Street in Framingham, Massachusetts, and subsequently One Main Street in Whitinsville, Massachusetts.Eastern Acoustic Works was co-founded in 1978 by partners Kenneth Berger and Kenton Forsythe, who had previously worked together at Forsythe Audio.
EAW's first single enclosure system was the CS-3 designed for Carlo Sound in Nashville, Tennessee. It combined a B-215 dual 15-in low-frequency horn, a MR102 12-in mid-frequency horn and a Community BRH90 high frequency horn into one gigantic box, and was the first commercially available horn-loaded single enclosure box system.
In 1985 EAW became famous by developing the KF850 loudspeaker system. For many years this system was the standard among loudspeakers used for professional touring shows. With this system EAW gained much of its credibility in the professional audio industry. Carlo Sound and Sun Sound were among the first regional sound rental companies to receive the KF850's.
EAW also became well known for creating custom loudspeaker designs for specific projects and applications. Technologies developed for these designs have led to the development of many of EAW's standard products, which are mainly used in professional and commercial sound reinforcement applications, such as concert venues, music and dance clubs, theaters, stadiums, theme parks, and houses of worship.
In 2000 EAW was purchased by Mackie Designs, Inc., now called LOUD Audio, LLC.
In 2018, EAW was purchased by RCF, to be run as a separate entity. 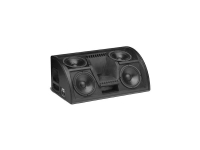