No results found with that criteria :(
ADVANCED SEARCH
You are here: HomeCategoriesVisualProjector LensesEPSON ELPLM10 Ex-demo, Like new
ABOUT THE PRODUCT ABOUT THE MANUFACTURER GLOSSARY


Seiko Epson Corporation (Epson being an abbreviation for "Son of Electronic Printer"), or simply Epson, is a Japanese electronics company and one of the world's largest manufacturers of computer printers, and information and imaging related equipment.
Headquartered in Suwa, Nagano, Japan, the company has numerous subsidiaries worldwide and manufactures inkjet, dot matrix and laser printers, scanners, desktop computers, business, multimedia and home theatre projectors, large home theatre televisions, robots and industrial automation equipment, point of sale docket printers and cash registers, laptops, integrated circuits, LCD components and other associated electronic components.
It is one of three core companies of the Seiko Group, a name traditionally known for manufacturing Seiko timepieces since its founding. 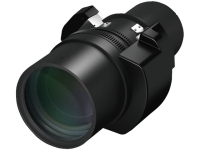