No results found with that criteria :(
ADVANCED SEARCH
You are here: HomeCatalogueAudioLine ArraysJBL VerTec VT4889 Package Used, Second hand
ABOUT THE PRODUCT ABOUT THE MANUFACTURER GLOSSARY

The VT4889 Three-Way Line Array Element is designed to deliver high-quality reinforcement of music and speech in a variety of applications including concert audio and corporate A/V presentations of all types for both portable users and fixed venue installations. 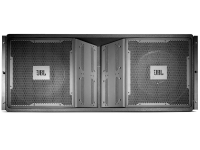