No results found with that criteria :(
ADVANCED SEARCH
You are here: HomeCategoriesAudioComplete Sound SystemsL-Acoustics A15 Focus-KS21-LA4X Sound Package Used, Second hand
ABOUT THE PRODUCT ABOUT THE MANUFACTURER GLOSSARY

A15 Focus is a medium throw loudspeaker designed for production applications. Part of the multifunctionnal A15 family, the passive 15“ enclosure offers exceptional deployment flexibility and simplicity without compromising performance.
With a tightly-controlled 10° enclosure coverage, A15 Focus boasts an impressive output of 144 dB and ensures projection up to 45 m. Panflex allows users to adapt the directivity to the audience geometry and ensure exceptional frequency response stability.
Combinations of A15 Focus and A15 Wide can be flown or stacked to form a vertical line source. A15 Focus can also be used individually as a configurable directivity point source for front fill or delay applications where a narrow coverage is required.
A15 Focus provides the low frequency contour of a large concert system and KS21 subwoofer further reinforces the contour and extends the bandwidth to 29 Hz.
A15 Focus is a highly scalable solution that delivers concert level performance for small to large events or supplements a larger L-Acoustics solution for the world’s biggest stages.

KS21 is a compact reference subwoofer designed to extend the bandwidth of A15 and A10 systems. KS21 features one high excursion, direct radiating 21" transducer mounted in a bass-reex tuned enclosure.
KS21 operates from 29 Hz to 60 Hz when associated with A15, or 30 Hz to 100 Hz when associated with A10. KS21 features L-Vents that substantially reduce turbulence and port noise at high levels while also increasing LF eficiency.
The KS21 frequency response is optimized to couple perfectly with both systems. KS21 features a two-point, integrated rigging system that is compatible with A15. Combinations of KS21 and A15 can be flown or stacked to form a full range line source. KS21 also integrates a threaded insert to enable pole-mount configurations of A15 or A10.
KS21 can be deployed in standard or cardioid congurations with dedicated presets, for flown and stacked deployment. 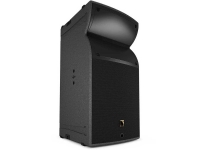