No results found with that criteria :(
ADVANCED SEARCH
You are here: HomeCategoriesLightingLighting DesksMA Lighting dot2 XL-F Used, Second hand
ABOUT THE PRODUCT ABOUT THE MANUFACTURER GLOSSARY


The dot2 XL-F is a compact lighting console designed for small to medium sized productions up to 4,096 control channels.

Intuitive operation is the core of the dot2 philosophy and with a comprehensive set of connectivity hardware on all console models, the dot2 range is suitable for most theatre, touring, corporate, television and education lighting environments. The easy to operate dot2 software is available in multiple languages and provides onboard Help and Direct Hints to guide a new user to operate the console to its full potential. Simply Patch and Go, with no additional setup required. A full range of clever programming and playback features provide intuitive access to advanced functionality. Access to generic fixture functions is via a Smart Dialogue and Store Look functionality ensures you can control and record what’s intended. Automated tools; Track & Shield and Auto-Unblock simplify cue-list management and Auto-Fix allows playback page changes to occur without unexpected results. The dot2 will feel familiar to theatrical users, 100mm faders provide full access to the master playback list at all times and a tactile level wheel gives access to lighting levels. Command-line syntax is fully supported alongside graphically assisted touch screen control of all features. Build for touring; the dot2 hardware is compact, durable and remarkably lightweight. Its optional modular plug & play F-wings and B-wings allow playback expansion and the full-tracking-back-up functionality ensures your show runs trouble free. Live Time, Tap Sync and multiple touch screens allow instant access to all playback functionality. And sophisticated features like Soft-LTP automatically preserve key-lighting levels without going through black.

The dot2 XL-F is an dot2 core console with a dot2 F-wing built-in. Still with a small footprint it includes the full programming section, master playback section, 14 fader playbacks and 28 individual playback buttons. Three built in touch screens and support for one external touch screen ensure the dot2 XL-F has the flexible hardware required for almost any kind of show.


Since its foundation in 1983, MA Lighting has expanded to become one of the internationally leading companies for computer-controlled light consoles, networking components and digital dimming systems. With integrated system solutions and the grandMA product family, international standards were set. 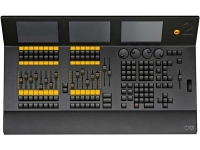