No results found with that criteria :(
ADVANCED SEARCH
You are here: HomeCatalogueAudioLine ArraysMartin Audio W8LC Package Used, Second hand
ABOUT THE PRODUCT ABOUT THE MANUFACTURER GLOSSARY

The Martin Audio W8LC is a compact line array enclosure designed to bring superb next-generation line array performance to concert, theatre and commercial events. It meets the need for a high power, high bass impact system that is versatile and scalable for a very wide range of applications in the live sound, corporate and fixed installation fields. W8LC grids allow systems to be flown or ground stacked as required. Though compact in size, the W8LC is a full-bandwidth system and may be used without subwoofers in many applications. Where additional low frequency extension is required, W8LCs may be complemented by the W8LS Line Array subwoofers, WLX horn and reflex loaded subwoofers or WSXa horn loaded subwoofers.
Following the all-horn design philosophy of the full-size W8L Longbow, the W8LC is a 3-way system that combines line array principles with innovative horn loading techniques to produce a very powerful compact line array with impressive dynamic impact.
The low frequency section of the W8LC comprises a horn loaded 12" (300mm)/3" (75mm) coil neodymium driver that is reflex loaded to extend the LF output to below the natural cut-off point of the horn. This Hybrid technique marries the very high efficiency of horn loading with the extended low frequency response of a reflex enclosure.
The mid horn of the W8LC utilizes 2 x 6.5" (165mm)/1.5" (38mm) coil, maximum efficiency drivers to produce 106dB at 1m for a 1W input - a significant efficiency gain over direct radiator systems.
The W8LC's HF section comprises three 1" horn elements to produce a low-curvature vertical wavefront with an efficiency of 109dB at 1m for a 1W input. This optimal HF curvature enables W8LC enclosures within the array to be splayed up to 7.5° without introducing gaps in the HF vertical coverage. 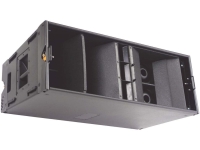